Alongside the Black Sea coast 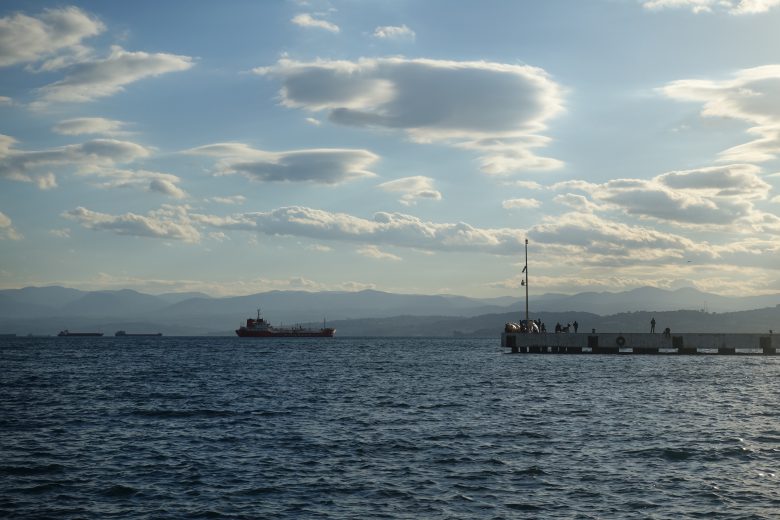 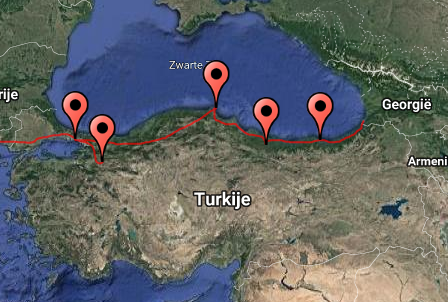 After spending two-and-a-half month in Europe, I finally made it to Turkey. This meant I would soon make a big step by leaving the European continent. I arrived in Istanbul by taking a night bus from Thessaloniki (Greece). In Turkey, I would volunteer at an organic farm for the second time and travel to Georgia by crossing a lesser-known area.

The city which I would visit three times. The first time, I arrived after an unexpected comfortable and quick bus ride. It was around 7 am on a Sunday morning. But even considering those facts, I couldn’t help to notice how sleepy this metropolis looked. This was far from what I expected it to be. I was already in hostel ‘Harmony’ around 8 am. A decent place with a cozy rooftop. Arriving this early in the morning meant I still had some time to kill before I could actually check-in. So I went exploring the old town by seeing the Haga Sophia and the Blue Mosque. Two days later, I would set foot on Asian soil by taking the ferry to the other side of Istanbul. This brings me to my second organic-/ permacultural-based farm; Zeytinlibogaz.

Zeytinlibogaz is the name of the farm of which I came to volunteer for the first two weeks of October to learn more about farming and permacultural principals, but also because I wanted to settle for a moment after travelling for two months straight. I was actually looking forward to do some labour intensive work. But be careful what you wish for, they say… 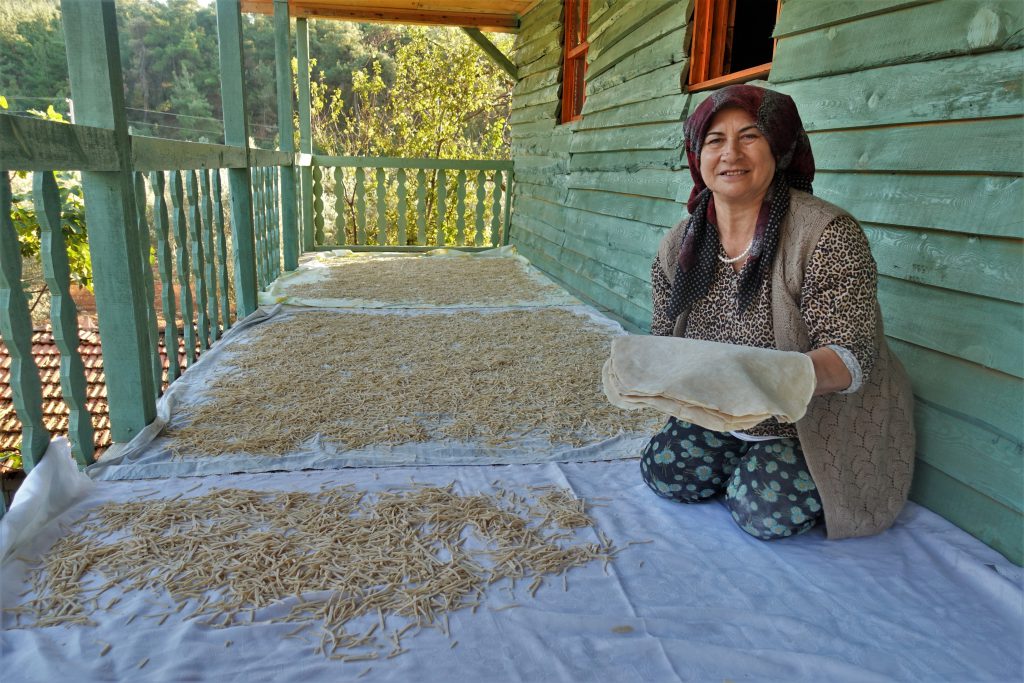 The farm is owned by Selçuk, a 43-year-old Turkish man. While his wife and son lives in Istanbul, he spent most of his time at the farm with his parents. He set out this farm with a partner about 10 years ago. Three years ago they split up and he started to take volunteers. He learned most of the farming himself and gained quite some knowledge via a hard working mentality. This is also were it gets a bit dubious, because he expects the same from the volunteers. Instead of working 5 hours a day 5 days a week, which is average for volunteers (and promoted on his website), we are working 10-12 hours a day 7 days a week. Like I said, I came here to work hard, but it would have done me better if I could rest a bit more and get a few days off. Besides this, we also had our funny moments. Selçuk is a guy with a specific type of humor. If your into it, you definitively can get some laughs. Daisuke, a long term traveler from Japan, was another volunteer here, of which I spent most of my time. 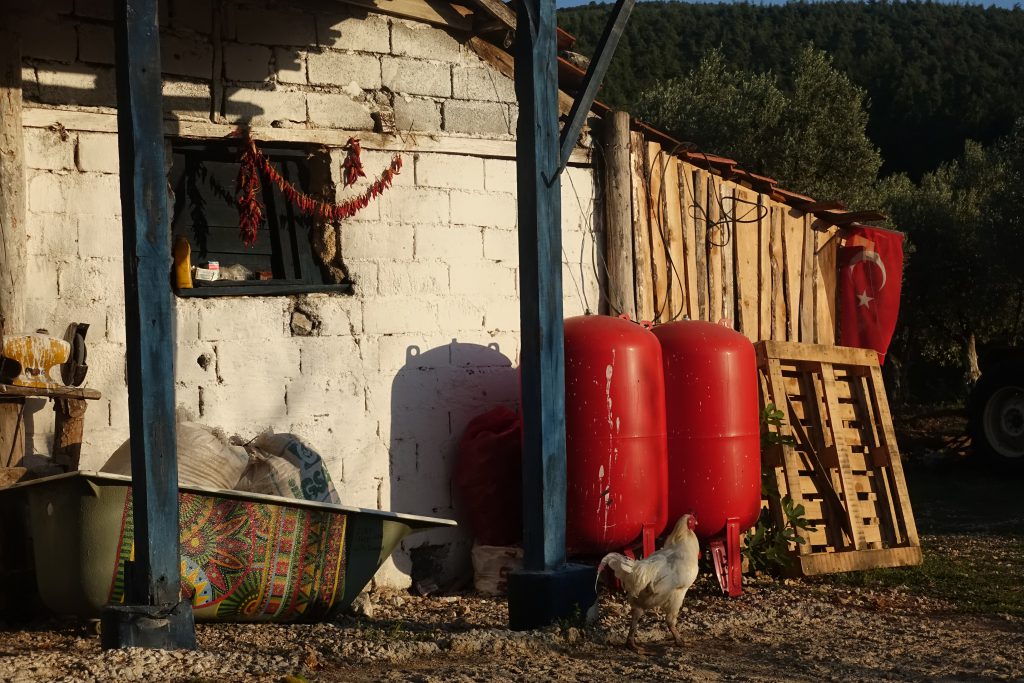 During my time at the farm we had a lot of different tasks. From planting a field full of garlic, to buy vegetables at the market, making client specific orders and building with wood. So it is to say that I gained quite some knowledge about the local and daily farm life. They also took into account that I’m living on a plant-based diet. The meals were always plentiful and delicious!

I got to experience a Hammam (Turkish Bath) as well. The three of us went in the evening after work to a local Hammam. On the countryside it is very cheap to go. For a bath with sauna, you end up paying about €2. If you want to add a body scrub and massage, you paying an additional €3.

Now I’m heading back to Istanbul. My hands will remain partly black for the coming weeks though, due to the peeling of the walnut fruits.

The third and, most likely, the final time I visit Istanbul during this journey. I decided to stay on the Asian side this time, in the hip and trendy neighborhood of Kadikoy. In this neighborhood I found a good and cheap Airbnb. I had a private room and shared the apartment with local students, one of which could speak decent English. Although there aren’t touristic hotspots in this part of the city, it is nice to hang around. This neighborhood has a very high density of vegan restaurants and hip coffee houses. So a great place for me to be at!

During my stay here, I also met with two travelers I had met in Albania (Julia and Thakuro). It felt great meeting them again and catching up on stories from our travels. We would go separate ways, but will meet with Julia again in the next three countries to visit. Next I would take the night bus to Sinop, an ancient coastal city in Central-North Turkey.

Sinop is located beautifully and packed with a rich history dating back to the 7th century b.c. It also still contains some of the old city walls (from different era’s).

One of the most famous persons to be born here was Diogenes (4th century b.c.). Diogenes was a philosopher, who advocates self-sufficiency (although originated from a wealthy family). He got rid of basically all of his belongings, only slept in public places and begged for his food. He gained popularity by keeping his principals, not always in the most positive way. When Alexander the Great came by and asked if he could do any favor. Diogenes replied; “Yes, stand out of my sunlight”.

I read about Diogenes in the archeological museum, which is an interesting place to go to if you want to learn about Sinop’s past. I went to the prison museum after. Despite the lack of information, it is quite an interesting place to walk through. You get an eerie feeling being in such an old and dark prison. During the last part of the day, I was walking uphill to get a good view of the city. Here is where you can see the peninsula Sinop is built on. When I finally got back to the Airbnb, I quickly went to bed. Still hadn’t slept much, as it was the same day as I arrived from the night bus.

The next day brought me to Turkish northernmost point; “Ince Burun”. Solely standing an iconic lighthouse on the cliff facing the Black Sea. I don’t know if it was my lack of condition, the steep hills, the old bike or a combination of all, but it was a tough ride. The views however, were very rewarding.

My next stop was at Korgan. I found a host on couchsurfing, who is kindly enough to let me sleep on his couch. This would be my first experience of that sort, so I was quite excited. 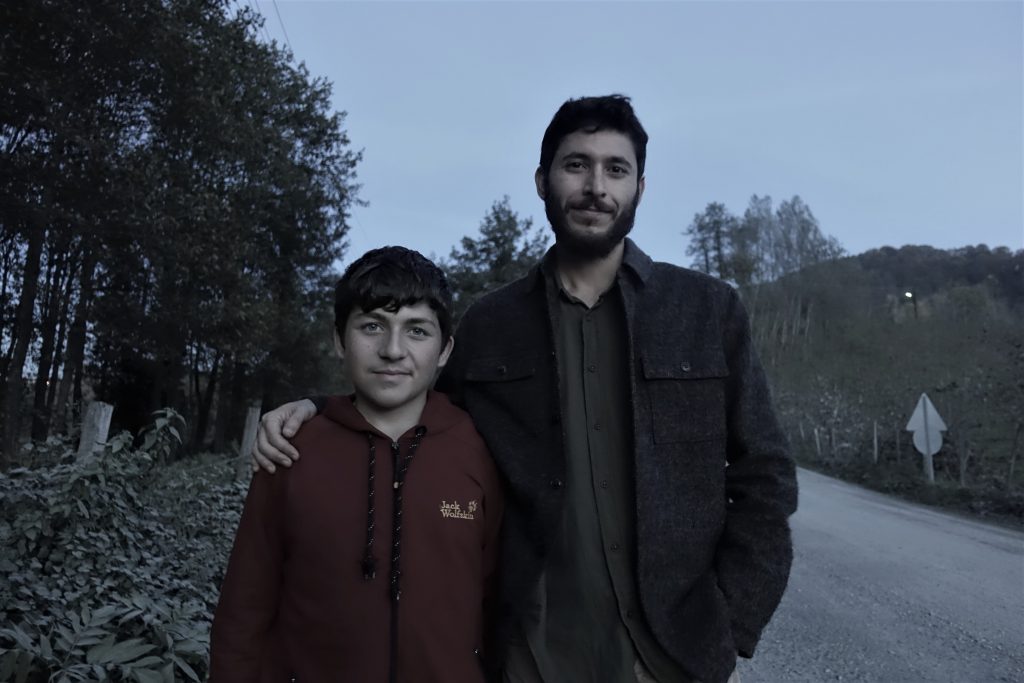 I heard from a fellow traveler whom I met in Macedonia, that he went couchsurfing while traveling the Black Sea coast of Turkey. He had enjoyed great experiences there, so I wanted to give it a try. Through couchsurfing I had to send many requests before someone reacted positively. That person became Ali.

I was coming from Sinop and we met in Samsun. From there we went to the town of Korgan, where he currently lives and works as an art teacher. It was a bit nervous in the beginning to be honest. Never done it before and didn’t really know what to expect. It turned out to be a great cultural experience. Korgan is a rural conservative town of 30.000 people with no touristic infrastructure. Nothing to be excited about except a little walk around the countryside. The interesting part however, was to have that exchange of information with locals, which is very hard to get when travelling to hostels. We shared dinner every night. But because he lives his daily life as well, I had to entertain myself most of the time. I also could come to his school one day for an hour. The children got the opportunity to ask me all sorts of questions and they were very enthusiastic.

Trabzon would be my last stop in Turkey before entering Georgia. This time I rented a private room via Airbnb. The host was very kind and treated me as if I was her child. The city wasn’t that special so I decided to make a day trip to Uzungol. A touristic town about 2 hours away, situated in a valley between the mountains. While it is still about 22 degrees in Trabzon, Uzungol was 10 degrees colder. And if you get out of the sun you can already feel the cold winter air. The mountain peaks already contained some fresh snow, while the loaf trees started to change color. The view was therefore quite spectacular.

Although I’m very eager to get back to Georgia, I was going to miss Turkey as well. I met some of the most hospitable people so far on my journey on the less traveled part of the Black Sea coast. Especially the Eastern part of Turkey would be something to go back to and explore further.